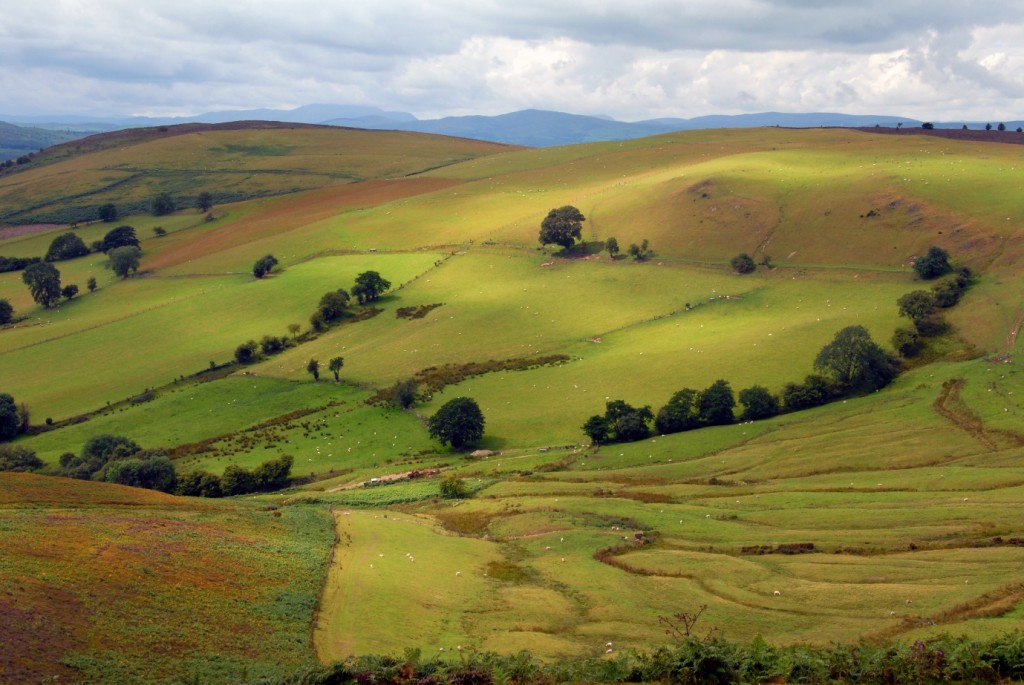 A new edition of Pathfinder Guide North Wales and Snowdonia was published on 29 June 2015.

A companion title to Pathfinder Guide Snowdonia, and written by the same author, Terry Marsh, the new North Wales edition still retains wonderful walks in the Snowdonia National Park, including another ascent of Snowdon itself, but includes highly scenic routes across the breadth of North Wales from the Lleyn Peninsula in the west and eastwards to the English border taking in the Berwyn mountains, the Clwydian Hills and the Vale of Clwyd.

This title replaces Pathfinder North Wales, Snowdon and Offa’s Dyke, and in comparison there are 10 brand new walks and the other 18 routes have been updated. In total there are 168 miles of walking and more than 10,000 metres of total ascent over the 28 routes, representing around 95 hours of delightfully attractive walking across North Wales.

Below is an excerpt from the book’s introduction and one of the new walks to sample. We hope you enjoy it and that it whets your appetite for more Pathfinder Walks. 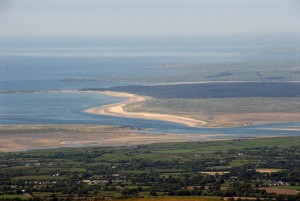 The sands of Newborough, Anglesey, from the summit of Mynydd Mawr – © Terry Marsh

This is a region of hills and vales, moorlands and forests, rather than mountains, although the smooth, grassy slopes of the Berwyns rise to over 2,700ft (822m) as they sweep across the area to the east of Bala Lake to descend into the Vale of Llangollen. To the north of Llangollen, beyond the Horseshoe Pass, the broad and fertile Vale of Clwyd stretches to the North Wales holiday coast and the reclaimed marshlands of the Morfa Rhuddlan. To the west the Vale is bordered by the moorlands of Mynydd Hiraethog, partially covered by the conifers of Clocaenog Forest. To the east is the switchback range of the Clwydian Hills, rising to 1,818ft (554m) at Moel Famau and providing a succession of magnificent viewpoints over the Vale. Threading its way across the ridge of the Clwydians is one of the most spectacular sections of Offa’s Dyke Path National Trail, which provides opportunities for energetic but highly scenic and enjoyable walking before it descends to the coast at Prestatyn.

To the east of the Clwydians, rolling country leads to the Dee and the English border. In the Middle Ages, Chester, the major town on the River Dee, was the launching pad for successive English invasions of North Wales and the narrow coastal strip was the easiest way in. A whole series of castles line this route, including the first two built by Edward I – at Flint and Rhuddlan – during the course of his successful conquest of Wales in the late 13th century, forerunners of the great castles that surround Snowdonia. Another outstanding castle is the border fortress at Chirk, continually modernised and occupied since it was built.

Apart from the medieval castles, other historic monuments range from prehistoric hill forts to the beautifully situated ruins of Valle Crucis Abbey, and from the cathedral at St Asaph to various industrial remains. The Industrial Revolution has left its mark on parts of north-east Wales, and no visitor can fail to be impressed by Thomas Telford’s soaring aqueducts at Pontcysyllte and Chirk.

Here can be found some of the most spectacular scenery in Britain and presiding imperially over this array of jagged ridges and formidable-looking peaks is Yr Wyddfa, the highest mountain in Britain south of the Scottish Highlands. It is known by its more familiar name, allegedly bestowed upon it by Dark Age sailors, who when voyaging from Ireland to Wales saw snow-covered hills on the skyline and christened them the Snowy Hills or ‘Snaudune’, initially a collective name that later became restricted to the highest peak only.

Snowdonia can be divided into a number of clearly defined ranges, each with their own characteristics. By far the most popular and most frequently climbed are the Carneddau, the Glyders and Snowdon itself in the north of the region. The great ridges and sweeping grassy slopes of the Carneddau cover an extensive area between the Conwy valley and Nant Ffrancon, and in the north descend abruptly to the coast. Between the Nant Ffrancon and Llanberis passes rise the majestic Glyders, their shattered volcanic rocks providing the spectacular pinnacles and formations that litter the summits of Glyder Fawr and Glyder Fach.

Beyond Llanberis Pass is Snowdon itself, accessible from a number of routes, and to the west of Snowdon lies the Hebog range. The central zone of Snowdonia comprises the shapely mass of Moel Siabod between the Llugwy and Lledr valleys, the Moelwyns and Cnicht, the latter sometimes known as the ‘Welsh Matterhorn’.

As well as mountain climbs the region has plenty of easy low-level walks. Separating the ranges are delightful valleys, like the steep-sided gorges of the Llugwy and Lledr near Betws-y-Coed and the wider Vale of Ffestiniog. Scattered throughout the area are lakes of varying size. Among the most beautiful of these are Tal-y-llyn and the Cregennen lakes overlooked by Cadair Idris, Llyn y Gader below the western flanks of Snowdon, Llyn Ogwen dramatically situated between the Glyders and the Carneddau, and Llynnau Mymbyr near Capel Curig, from whose shores there is possibly the finest view of all of Snowdon.

When travelling through Snowdonia the foremost historic remains that catch the eye are the great medieval castles, among the finest in Europe. Some of these were built by the native Welsh princes, as at Dolwyddelan, reputed birthplace of Llewellyn the Great, and Dolbadarn, but most were built by Edward I. In order to consolidate his conquest of Wales, Edward encircled Snowdonia with the formidable and highly expensive castles of Conwy, Beaumaris, Caernarfon and Harlech, all embodying the latest sophistications of castle construction. These castles remain as examples of medieval military architecture at its most advanced and refined. By far the most striking and large-scale man-made intrusions on the landscape of Snowdonia have come from 19th- and 20th-century industrial and commercial developments. Foremost among these was the slate quarrying industry which reached its peak at the end of the 19th century. It has now largely disappeared but around Llanberis and Blaenau Ffestiniog the remains of that industry have been turned into fascinating tourist attractions.

Click here to download the accompanying map – add it to your basket and we will send it to your email address.

There is little scope for losing one’s way on this high-level traverse of Llantysilio Mountain: the track is a wide, gravel blaze through heather moorland, clear enough to follow on a moonlit night. But while the route enjoys clarity and far-reaching views, there is a surprisingly extended series of ups and downs that will call for numerous view-appreciating halts.

From the roadside car park opposite the Ponderosa Café a number of wide, grassy paths rise through the heather, climbing around and above a large quarry; that which heads towards the quarry and then passes to the left around it is the most direct route to the top of Moel y Faen.

Take the on-going track as it descends, steeply in places, to a broad bwlch (pass) (A) and then climbs steadily to the highest point on the route, Moel y Gamelin, a neat summit crowned by a large cairn of rocks.

Another steep descent leads to a cross-mountain route (B) used by the Clwydian Way, from where you ascend once more, first to Moel y Gaer, and then up to the trig pillar on Moel Morfydd.

The view is splendid, reaching as far as Winter Hill in Lancashire, and across to the heart of Snowdonia, with Tryfan easily discernible, along with the Glyders, the Carneddau and the Snowdon massif. To the south the tops of the Berwyn Hills poke above intervening heights, while all around heather cloaks the entire hillside, a stunning sight in August and September.

There is evidence for human activity on these hills dating back to at least the Bronze Age, with a large burial cairn on the summit of Moel y Gamelin. Later, during the Iron Age, Moel y Gaer was chosen as the site for a small hill fort. In more recent times these rounded, heathery hills were transformed by extensive slate quarrying, mostly around the Horseshoe Pass, although with smaller quarries dotted around the hillsides. Many quarrymen lived in Rhewl and Llantysilio, walking the hillside tracks to the quarries each day.

Follow the track down from Moel Morfydd, to intercept a lane (C). Turn right, with fine views on your left over lush farmland, and walk gently up to Bwlch y Groes. Continue down the road as far as a signed bridleway on the right (D), and here leave the lane for a lovely grassy trail flanked by heather, bracken, bilberry, intermittent gorse and myriad wild flowers.

Follow the bridleway across the hill slope to intercept another bridleway running beside an intake fence. Close by, pass through a gate/stile (E), and then continue across rough pasture to another gate/stile, beyond which a grassy path runs beside a fence and past Tan-y-foel farm. Press on, following the bridleway across numerous pastures, always roughly parallel with a fence on the left.

The path continues easily across heather moorland, accompanied either by a fence or a wall. When the wall and the on-going bridleway diverge (F), stay with the latter to meet a fence above the top edge of a quarry (G). Here, the onward route lies over a fence and directly above the quarry, but a safer option keeps a little more distant from the quarry boundary. Both ways involve striding over a low fence, and then pressing on towards the concealed cottage at Plas Norway. The bridleway underfoot steers you towards the cottage, but you will need to move left to locate a gate (H) giving onto a narrow lane.

Turn right, up the lane, passing Plas Norway, and then simply follow the lane, past the Moel-y-faen quarries back towards the Ponderosa; the final section of the lane can be shortcut by a clear path through heather.

Pathfinder Guide North Wales and Snowdonia is written by Terry Marsh and published by Crimson Publishing Ltd. Want to read more? You can purchase a copy here. 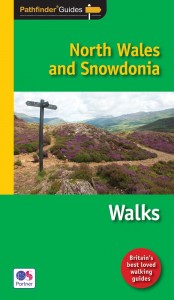